Films in this screening are short-listed for the Tribute.ca Best Actor Award.

Paper Princes, Gypsies and the Boy With No Return Address by/par Celeste Koon, Canada. The world of Liam, an eccentric 10 year-old. 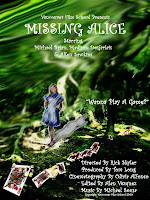 Missing Alice by/par Rick Skyler, Canada. A delusional man revisits his childhood friend in Wonderland only to uncover the awful thruth that changed his life.

Flamingo by/par Mike Harris, USA. Tempted by the affections of an attractive waitress, Ramses finds himself torn between his own interests and those of his eccentric best friend.

Ellipsis by/par Adam Justice, UK. The powerful emotions in relationships come together with a bang for one man.

Allegro Compreso by/par Enrico Maria Artale, Italy. A young composer tries to live on his own, he realizes that it's not easy at all.

Nødutgang (Emergency Exit) by/par Tomas Solli, Norway. A young man is taken hostage. Both him and the robber must solve their problems before time runs out.

The Drifter by/par Craig Calamis, USA. A newly engaged couple find themselves in the wrong place at the wrong time.

The King's Receipt by/par Peter Pa and Matthew Feener, USA. The ruler of a lonely kingdom sends his sole subject, a jester, on a diplomatic mission.
Posted by Michael "Llakor" Ryan at 2:23 AM